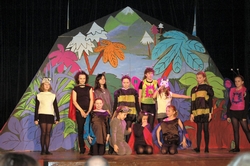 Mr and Mrs Darling are getting Wendy, John and Michael ready for bed, prior to going out for the evening. Mrs Darling has misgivings as she is sure that she has seen a boy at the bedroom window, despite the room being on the third floor. Mr Darling is sceptical, despite the fact that Mrs Darling has caught and secreted the boy's shadow under the bed. Wendy is left in charge and the children are soon asleep. Sure enough, peter Pan returns for his shadow, accompanied by the fairy, Tinkerbell. She is the antithesis of the traditional fairy, being noisy, self-opinionated and touchy. However, she is devoted to Peter. The two manage to wake Wendy, who takes an immediate dislike to Tinkerbell; the feeling is mutual. Despite this, Peter persuades the children to fly with him to Neverland.

We are then introduced to Captain Jas Hook and his rascally crew, including Mr Smee, who cannot quite get his head around the correct pirate, speak. Hook is full of bravado until the sound of ticking reminds him to make a sharp exit before the crocodile can make a meal of him.

In the meantime Tinkerbell has arrived; she persuades the Lost Boys that they should shoot the big white bird heading their way. This they do, only to discover that it is Wendy; Peter is enraged, but Wendy recovers despite the ministrations of 'doctor' Tinkerbell. In recompense, the boys build Wendy a house (of sorts); the end result is a warning against do-it-yourself. Peter and Wendy go to visit the mermaids, but are captured by the pirates and left to drown as the tide comes in. Hook also captures Tinkerbell and forces her to reveal the whereabouts of the Lost Boys hiding place; however, Tinkerbell is released and manages to rescue Peter and Wendy.

In Act Two we find Wendy telling the boys a story; despite the domestic bliss, Wendy tells Peter that they must return home. Peter takes umbrage and disappears, leaving all the others to be captured by the pirates and marched away, but not before Hook has poisoned Peter's medicine. Peter returns and Tinkerbell tells him what has happened, preventing disaster by swallowing the medicine herself. A little magic is required to restore her to life, before Peter and Tinkerbell race to the rescue. The final scenes show how Hook and the pirates are defeated, how Tinkerbell finds love with Smee and how the children are restored to their doting parents.

Nine principles, plus twelve cameo speaking parts and a chorus of pirates, forest spirits and animals.

Twelve scenes, with five main settings augmented with other items of scenery to create the necessary effects.