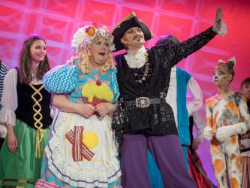 Dick and his cat Calico have arrived in London Town seeking to make their fortunes, only to find that they are not at all welcome as the locals are very suspicious of strangers. However, Alderman Fitzwarren’s adopted daughter Alice persuades her father to give Dick a chance by giving him a job, much to Fitzwarren’s wife Phobia’s displeasure. Calico is also taken on to help Tapioca Dripping, Fitzwarren’s cook, keep marauding rats out of her pantry.

Captain Cockleshell and Salty Swab, the captain and mate of the good ship The Unicorn, arrive to collect their orders for the next trading voyage, only to find that they have to carry sacks of flour to the ship, much to their disgust. All set off to prepare for the voyage, leaving Alice to confide in Dick that she is an orphan and that despite appearances her life is not easy as she is much put upon by her stepmother and that Dick’s arrival is a breath of fresh air.

Captain Cockleshell and Salty, with a great deal of complaining, set out for The Unicorn with the flour; on the way they are waylaid by Snitch and his gang of rascally rats who relieve them of the flour and send the captain and Salty packing. All this is witnessed by Dick and Calico, who set about the rats, recover the flour and head for the ship. The Captain and Salty confess their failure to Fitzwarren and their humiliation only ceases when Dick and Calico arrive to explain how the tables were turned and that all is well. Phobia has noted Calico’s money making potential and devises a scheme whereby she will pay Snitch and his rats to cause mayhem and then she will offer to send Calico in to get rid of the rats (who of course are in on the scheme), in return for a nice fat reward. All she needs is somewhere to try out her little scam – and the answer is the rich kingdom of Barbary, exactly where Fitzwarren and his cargo would be heading. If she can get there first, she will be rich and Fitzwarren and Alice will be ruined. All of this is put to the rats, who are only too happy to join in.

Meanwhile, Tapioca, Dick and Alice are endeavouring to bake a cake to sustain the crew on the voyage; as none of them have a clue when it comes to cooking, the result is predictably messy. The situation is only saved by Calico, who produces the perfect cake he baked earlier.

True to form the Captain and Salty maintain that all is prepared for Fitzwarren’s voyage to Barbary, the only problem being that they have failed to find a crew. Fitzwarren has no choice but to press gang Dick, Alice and Tapioca and then to set off to recruit some of the townspeople to make up the rest of the crew.

Calico and his fellow cats are enjoying a night on the tiles when Phobia arrives to persuade Calico to join in with her scheme. But Calico does not like the sound of this at all and refuses to go with her, whereupon Phobia with the help of the rats captures him and drags him away to her ship.

When the news of Calico’s kidnap and Phobia’s scheme reaches Dick and the others, Fitzwarren determines to set sail in pursuit. Left alone, Dick decides that as he is unlikely to see Calico again and all his plans to make his fortune are falling apart, that London is not for him and that he must go back to where he came from. When Alice discovers what he has done, she sets off to find him, catching him up on Highgate Hill. She gives him a good dressing down for giving up so easily and with the help of the friendly sound of Bow Bells persuades him to join the voyage to Barbary in a bid to rescue Calico and to foil Phobia’s plans.

During the voyage they are overtaken and boarded by Black Berry and his rascally pirates who take the crew prisoner in order to sell them as slaves. When Fitzwarren and Tapioca realise that the pirates coincidentally intend to take them to Barbary, they explain Phobia’s scheme and persuade Black Berry to join them.

Phobia, having arrived In Barbary and set the rats to work creating havoc, tricks the King into agreeing to give her a large reward, once she has got rid of the rats using Calico as her secret weapon. Unfortunately for her, Calico refuses to play his part. Things are turning nasty when Dick and the others arrive. Calico is now quite willing to solve the rat problem, which he proceeds to do, resulting in Phobia and the rats disappearing, never to be heard of again. The grateful King rewards Dick and the others, Dick proposes to Alice, Black Berry proposes to Tapioca who discovers that Alice is her long lost daughter, and all ends happily.

Eleven principles plus a chorus of townspeople, courtiers, rats, cats and pirates.

Twelve scenes with four main settings plus use of half tabs or a lower stage.