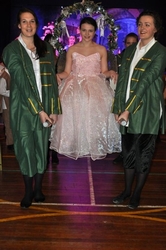 The Baron and Cinderella are talking of the future, in that one day Cinderella will leave to be married and in the meantime, how to make ends meet. The Baron decides to invite his sister, Hysteria, to stay, together with her daughters Hernia and Nausea, in order to share the costs. Their faithful servant, Buttons, who has taken a shine to Cinderella, is sent with the invitation. Meanwhile the King and Queen are talking of the need to find a bride for the Prince in order to ensure the succession; despite the Prince's reservations a ball is arranged to allow prospective brides to be assessed. They also have to overcome the objections of the Chancellor and the foreign Secretary, to whom work is an unpleasant word.

The Prince and Cinderella meet by chance; Cinderella is invited to the ball but declines as she has only old clothes to wear. The Chancellor and Secretary, having been tasked to redecorate the palace, attempt to do it themselves, with inevitable messy consequences. Buttons returns with Hysteria, Nausea, Hernia, their many servants and piles of luggage; the new arrivals take over; Cinderella is forced to move into the kitchen and become a servant.

The Prince arrives to invite Cinderella to the ball as promised - Hysteria and the sisters invite themselves as well; Nausea and Hernia then argue over which of them will marry the Prince. They bribe Buttons to puff up their virtues and rundown Cinderella to the Prince; he agrees to this, only in the hope of keeping Cinderella to himself; they then summon Cinderella and tear up her invitation, leaving Buttons to console her bemoaning the fact that there is no fairy godmother. But, of course, there is!

Buttons arrives at the palace to warn the Prince off and receives short shrift. However, it is clear that the Chancellor and Secretary have designs on the sisters. Nausea and Hernia prepare for the ball, involving the customary dressing scene; they depart leaving the Baron to console Cinderella before he also leaves. The fairy godmother arrives and equips Cinderella for the ball, leaving her with the instruction to leave the ball by midnight.

Cinderella turns out to be the belle of the ball, but rushes away leaving a slipper behind; the Prince vows to find the owner and of course, does. The Prince gets Cinderella, the sisters get their men and Buttons gets promoted.

Thirteen principles, plus a chorus of mice/horses, frogs/footmen and courtiers.

Eleven scenes, with four main settings, augmented with other items of scenery to create the necessary effects.

Please note: the script had been fully revised and updated in 2012, providing more speaking part opportunities for children. There is also a new take on the transformation scene, part of an overall change of style based on the introduction of the Fairy Godmother’s fairies into the cast.