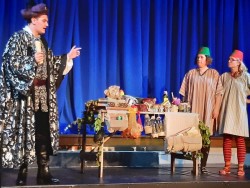 Aladdin and his idle young friends are planning what mischief they can get up to, but are taken to task by some of the citizens, just as Aladdin’s mother, Widow Twankey, arrives on the scene, getting the brunt of their displeasure. They are interrupted by the arrival of the Sultan (who bears a striking resemblance to a certain head of state), the Vizier, the Princess and their entourage. The Sultan brags about all he plans to do, only to be reminded by the Vizier that the palace treasury is empty. Once the procession has moved on, Aladdin, obviously smitten by the Princess, is ribbed by his friends and then brought down to earth by his mother, who talks of the job he must find.

Aladdin wanders away, but is intercepted by Abraxas, a sorcerer, and his two apprentices, Fumble and Blunder. Abraxas tells Aladdin that he will make him rich if Aladdin retrieves an old lamp, supposedly a family heirloom, from a cave; a lamp whose power can make the sorcerer master of the world. Aladdin agrees to the task and enters the cave, where he encounters the Spirits of the Cave. When he tells them of his task, they convince him that his so-called ‘uncle’ must be a sorcerer as no one else could know how to gain entry to the cave.

The Spirits help Aladdin to find the lamp and also present him with a ring; in return Aladdin promises to release the Spirits from the cave. He then tries to drive a hard bargain with Abraxas, refusing to hand over the lamp, only to be shut into the cave to repent at his leisure. By a happy accident Aladdin releases the Genie of the Ring, who helps him and the Spirits to escape from the cave, much to the sorcerer’s disgust.

When Aladdin shows the lamp to his mother, she decides it needs a good polish, releasing the Genie of the Lamp, who agrees to furnish Aladdin with everything he needs to woo the Princess. Unfortunately, this conversation is overheard by Abraxas, Fumble and Blunder.

The Sultan decides that the only way he can refill the palace treasury, is to marry the Princess off to a rich suitor; unsurprisingly, the Princess is not happy with this prospect. Just then, Aladdin and his friends arrive, now beautifully turned out, to ask for the Princess’s hand, only for the Sultan to come up with a shopping list of all the riches Aladdin must bring if his suit is to be accepted. Abraxas also arrives, offering the world for the Princess’s hand. He is sent on his way, swearing revenge, while Aladdin asks the Genie of the Lamp to provide all the riches demanded by the Sultan.

The sorcerer decides that he must ply the princess with gifts if he is to win her and tasks Fumble and Blunder to create a perfume, with predictably awful results. Then Aladdin arrives at the palace with his newly acquired treasure, is accepted by the Princess and the Sultan and a wedding is arranged. Meanwhile, Abraxas sets out his plan to wait until Aladdin is away and then to trick the Princess into handing over the lamp, by offering ‘new lamps for old’. Sure enough, as soon as Aladdin is away, Abraxas, suitably disguised, puts his plan into action, successfully fooling the Princess. Immediately he summons the Genie of the Lamp, who spirits the Princess and the palace far away.

Aladdin realises what must have happened and the Sultan tells him, in no uncertain terms, that he must rescue the Princess. But how? The Genie of the Ring has the solution and transports the rescue party in pursuit of the Princess. Luckily, Abraxas decides to take a trip to survey the lands he plans to conquer, leaving Fumble and Blunder to guard the Princess. Aladdin and his friends pose as interior decorators to fool Fumble and Blunder and to gain access to the Palace and the Princess. They decide that the Princess will pretend to look more favourably on Abraxas when he returns, will offer him wine containing a sleeping draught and take back the lamp once he is asleep. The plan works, the lamp is recovered, Abraxas is banished, the Princess and the palace restored to their rightful place and all ends happily.

Ten principals plus a chorus of townspeople, Aladdin’s friends, the Sultan’s courtiers, the Princess’s courtiers and the Spirits of the Cave – the latter become Aladdin’s courtiers.